The essays collected in The Little Death of Self are meditations toward poetry by a poet who finds this mysterious genre the weirdest, most compelling of all human ways to imagine—or fathom—the great world. —University of Michigan Press

From the publisher: The line between poetry (the delicate, surprising not-quite) and the essay (the emphatic what-about and so-there!) is thin, easily crossed. Both the poem and the essay work beyond a human sense of time. Both welcome a deep mulling-over, endlessly mixing image and idea and running with scissors; certainly each distrusts the notion of premise or formulaic progression. The essays in The Little Death of Self emerged by way of an odd detail or bothersome question that would not quit—Why does the self grow smaller as the poem grows enormous, or as quiet as a half-second of genuine discovery? Why does closure in a poem so often mean keep going, so what if the world is ending! Must we stalk the poem or does the poem stalk us until the world clicks open?

Marianne Boruch is Professor of English, Purdue University, and a faculty member in the MFA Program for Writers at Warren Wilson College. Her ninth poetry collection, Eventually One Dreams the Real Thing (Copper Canyon Press), was cited as a “Most Loved Book of 2016” by the New Yorker. Two of her poems appear in NER 38.2; prior to that NER 33.2 featured “The End Inside It,” an essay republished in The Little Death of Self.

University of Michigan Press released The Little Death of Self as part of its series, “Poets on Poetry.” 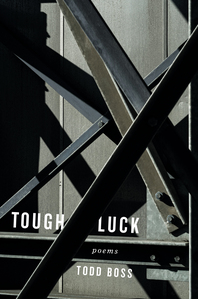 The freighted, swiftly moving poems in Tough Luck crisscross the chasm between peril and safety as if between opposing riverbanks, revealing a frequently heart-stopping view of the muscled waters below. Marriage, family, home—all come crashing down . . . —W. W. Norton

From the publisher: In 2007, Todd Boss crossed the I-35W bridge in Minneapolis just twenty minutes before its disastrous collapse into the Mississippi. Thirteen people died in the accident, and 145 were injured. Tough Luck, a collection of poems, is anchored in this event and the questions it raised for him, his family, and his community. The poems’ down-to-earth quality and strong sense of place will appeal to readers of Robert Frost, Kay Ryan, and Seamus Heaney. Dimitrov instills palpable emotional yearning in his readers, as if you’re a tourist inside your own life: “A little of our misplaced lives, / we saw them waving on the roof in the dark / and thought they were birds.” —Publishers Weekly

From the publisher: Alex Dimitrov’s second book of poems, Together and By Ourselves, takes on broad existential questions and the reality of our current moment: being seemingly connected to one another, yet emotionally alone. Through a collage aesthetic and a multiplicity of voices, these poems take us from coast to coast, New York to LA, and toward uneasy questions about intimacy, love, death, and the human spirit. Dimitrov critiques America’s long-lasting obsessions with money, celebrity, and escapism—whether in our personal or professional lives. What defines a life? Is love ever enough? Who are we when together and who are we by ourselves? These questions echo throughout the poems, which resist easy answers. The voice is both heartfelt and skeptical, bruised yet playful, and always deeply introspective.

In addition to Together and By Ourselves, Alex Dimitrov is the author of Begging for It and the online chapbook American Boys. He is the recipient of the Stanley Kunitz Prize from the American Poetry Review and a Pushcart Prize. He has taught creative writing and literature at Bennington College, Columbia University, and Rutgers University-New Brunswick. He currently resides in New York City. His poem “Champagne” was included in NER 36.3.

Together and By Ourselves can be purchased directly from the publisher, Copper Canyon Press, as well as from independent booksellers. With exceptional candor, Dungy explores our inner and outer worlds—the multitudinous experiences of mothering, illness, and the ever-present embodiment of race—finding fear and trauma but also mercy, kindness, and community. —W. W. Norton

From the publisher: Camille Dungy journeyed across America working as a poet-lecturer, all the while tending to her daughter, then only a toddler. In her prose debut, Guidebook to Relative Strangers, she recounts the experience, paying particular attention to the way in which she and her child were perceived as two black females. Dungy grapples with the painful legacy of the slave trade, but she also celebrates motherhood and those bright moments that characterize her daughter’s entrance into the world.

Camille Dungy is a professor of creative writing at Colorado State University. Her collections of poetry have won numerous honors, including the American Book Award and the Crab Orchard Open Book Prize. Her essay “A Shade North of Ordinary,” an excerpt from her travels, appeared in NER 36.2. A Fugitive in Walden Woods manages that special magic of making Thoreau’s time in Walden Woods seem fresh and surprising and necessary right now . . . This is a patient and perceptive novel, a pleasure to read even as it grapples with issues that affect the United States to this day. —Victor LaValle

From the publisher: In Norman Lock’s fourth book of The American Novels series, Samuel Long escapes slavery in Virginia, traveling the Underground Railroad to Walden Woods where he encounters Henry David Thoreau, Ralph Waldo Emerson, Nathaniel Hawthorne, William Lloyd Garrison, and other transcendentalists and abolitionists. While Long will experience his coming-of-age at Walden Pond, his hosts will receive a lesson in human dignity, culminating in a climactic act of civil disobedience.

Norman Lock is the award-winning author of novels, short fiction, and poetry, as well as stage, radio, and screenplays. He has won The Dactyl Foundation Literary Fiction Award, The Paris Review Aga Khan Prize for Fiction, and writing fellowships from the New Jersey State Council on the Arts, the Pennsylvania Council on the Arts, and the National Endowment for the Arts. He lives in Aberdeen, New Jersey. His work has appeared in New England Review numerous times, most recently in NER 34.2.

A Fugitive in Walden Woods can be purchased directly from its publisher, Bellevue Literary Press, or from independent booksellers. The first collection from the multi-award-winning American poet and playwright Dan O’Brien, including The Body of an American.

Plays One includes the following five pieces: The Body of an American, The House in Hydesville, The Cherry Sisters Revisited, The Voyage of the Carcass, and The Dear Boy.

Dan O’Brien is a playwright and poet and recent Guggenheim Fellow in Drama & Performance Art. In addition to his work as a playwright he has published multiple volumes of poetry, most recently in 2015 in a collection entitled New Life. An alumnus of Middlebury College, he currently resides in Los Angeles. An excerpt from his play The House in Scarsdale will appear in NER 38.3.

Plays One can be purchased directly from the publisher, Oberon Books, or from independent booksellers. A comprehensive yet eminently readable—even exhilarating—romp through Berlin’s history, coupled with a native’s view of its colorful present. Eveything you need to know about the German capital, and more. —Kimberly Bradley, Monocle Magazine

In Berlin, Joseph Pearson retraces the history of Germany’s capital city, from its beginnings as a small settlement to its present role as one of the world’s economic and political centers. Berlin’s nine-hundred-year history has been colored by vicious regimes, pivotal artistic movements, scandalous night life, and industrial innovation. Pearson walks the streets of modern-day Berlin to find echoes of this tumultuous past, and to turn up the city’s little-known secrets.

Joseph Pearson is a cultural historian and writer at New York University, Berlin. His essay “Three German Cities” appears in NER 37.3. You can read more about Pearson in his “Behind the Byline” interview, in which he speaks with nonfiction editor J. M. Tyree regarding the link among self, history, and politics.

Berlin is available from the University of Chicago Press (North and South America only) and from their Reaction Books (UK/Europe), as well as from independent booksellers. Less a practical guide than an anthology of think pieces, How We Speak to One Another will nonetheless send nonfiction writers eagerly back to their desks. And it’s a fun read, even for nonwriters. —Publishers Weekly

From the publisher: How We Speak to One Another is some of the most engaging evidence we’ve got that the essay is going strong. Here, essayists talk back to each other, to the work they love and the work that disquiets them, and to the very basic building blocks of what we understand “essay” to be. What’s compiled in these pages testifies to the endless flexibility, generosity, curiosity, and audacity of essays. Even more than that, it provides the kind of pleasure any great essay collection does—upsetting our ideas and challenging the way we organize our sense of the world.

Craig Reinbold, one of the editors of this collection, has seen his writing appear in many journals and magazines including the Gettysburg Review, Iowa Review, Guernica, Gulf Coast, and Brevity. He was the managing editor of Essay Daily from 2013-2016. One of his essays, “All Things Equal on the West Side,” can be found in NER 33.3.

How We Speak to One Another is available directly from Coffee House Press and from independent booksellers. Simic has always had a knack for channeling the morbid—and managing to blend it with the joyous. It is in navigating those kinds of opposing emotions that he is at his most clever and profound . . . Image by image, Simic composes miniature masterpieces, offering what appears as a seemingly effortless study in language’s cinematic possibilities. —Publishers Weekly

From the publisher: The latest volume of poetry from Charles Simic hums with the liveliness of the writer’s pen—Scribbled in the Dark brings the poet’s signature sardonic sense of humor, piercing social insight, and haunting lyricism to diverse and richly imagined landscapes.

Charles Simic, poet, essayist, and translator, was born in Yugoslavia in 1938 and immigrated to the United States in 1954. Since 1967, he has published twenty books of his own poetry, in addition to a memoir; the essay collection The Life of Images; and numerous books of translations for which he has received many literary awards, including the Pulitzer Prize, the Griffin Prize, the MacArthur Fellowship, and the Wallace Stevens Award. Simic is a frequent contributor to the New York Review of Books and in 2007 was chosen as poet laureate of the United States. He is emeritus professor at the University of New Hampshire, where he has taught since 1973, and is distinguished visiting writer at New York University. He is a longtime contributor to New England Review, most recently with his translation work in NER 29.1.

Scribbled in the Dark is for sale directly from its publisher Harper Collins and from independent booksellers.